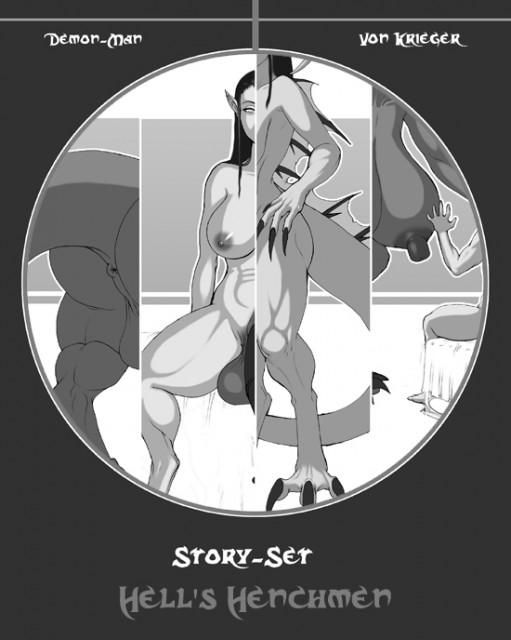 Hell's Henchmen, written by Hellkat von Kreiger, with illustrations by Demon-Man. A story in VK's Shattered Shards universe and deals with a poor guy ending up in one very special hell. It features bestial hermaphrodites with large equipment. --------- But what really drew Colin's attention was the impressive package between the demoness' legs. The pitch-shaded cock was as long as Colin's leg and even thicker around. It protruded from an animalistic sheath, and appeared just as bestial. It reminded Colin of an equine length, long, large, and thick with a ring around the middle. But where a horse's shaft would flatten out Aeshma's cock flared outwards and then slowly narrowed to a point; her length ending in a three-dimensional spade shape. "I think we'll both enjoy what I'm about to do with this." Aeshma said with a grin. Colin's eyes widened; his body not wanting that titanic prick to have anything to do with him. Especially not anything that had to do with being inside of him. "Oh don't worry," Aeshma said, positioning herself, "I'm not going to be putting anything in you, you're going to be putting a little something in me."