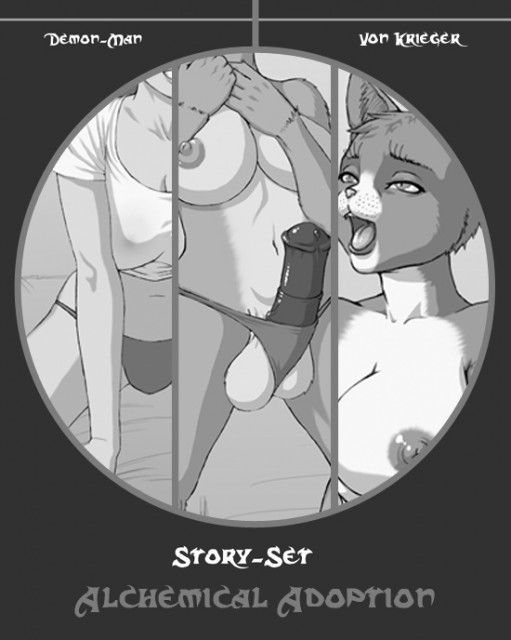 Alchemical Adoption, written by Hellkat Von Kreiger, with illustrations from Demon-Man. Adults only. Sold with permission.

A student wakes up to find his classmate in his bed, the morning after their alchemical lab blew up. The busty girl was not left unaffected...

The catgirl wrapped her arms around Alex, resting her head on his shoulder and pressing up against them. Alex found himself blushing again, as well as trying to figure out a polite way to say "I'm not really interested because you're not acting like yourself because you are A, sporting an alchemically enhanced libido, B, you're part way turned into an animal, and C, stars and stones I don't know what the heck that thing is digging into my thigh, but I think it's bigger than mine."

Unable to find one, Alex's somewhat overwhelmed brain could only come up with, "Umm...Rina, what's that stiff thing pressing against me? Do you have a spatula in your pocket?" She giggled again, "No, master, I'm just very happy to see you!" Alex had thought his blush couldn't get any deeper, but it seemed that yes indeed there were levels of color and warmth beyond what he had expected. "That... that's not always been there, has it?"

Rina shook her head, "Nope! Probably happened because you used a boy horse for your project, and I used a boy cat for mine. Wanna see it? It's pretty neat looking!" she said as she began to unbuckle her belt.